Across the Pond Christmas Project and Give-away 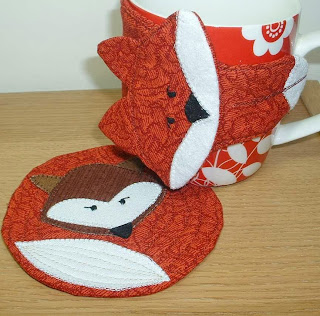 I love December – it is a month of joy and gifts and chocolates on the tree.  It is also time for another Across the Pond project but the last thing any of us need in December is a HUGE project.  So I have the perfect, one-hour make for you this month (okay, some may take one-and-a-half-hours but hey – what’s 30 minutes between friends?)


My choice of project this month is the cup cosy or ‘mug hug’ as I like to call them.  There are plenty around but two of my faves are:

Sew Happy Geek – this is the simplest and most versatile. 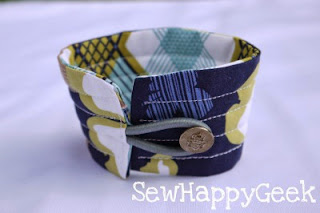 You can patch it, applique it or use one piece of designer fabric.  Quick, easy and effective.  You could even make a co-ordinating mug hug with left-over fabric from another project (mmmm maybe a Patchsmith mug rug?)  What a great little present that would be for the Secret Santa.
Note:  Ignore the comment about needing an account to download - this is no longer true.

And then there is Staci over at Crafty Staci who has a selection of FREE patterns and tutorials. 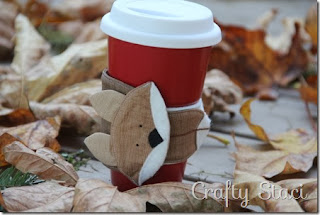 Now these are some seriously cute, fun designs and I chose to make her fox mug hug to match my Fox mug rug and coaster. 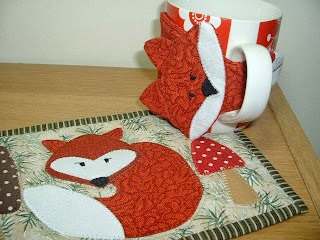 This mug hug went together really well - it was a little fiddly turning it right side out but my trusty chop-stick came to the rescue.  It took little more than an hour. 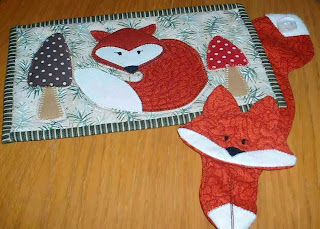 But I'm a greedy girl who wants all the presents on her wish-list.  I also wanted a mug hug for my pen pot.  My pen-pot-mug is quite short so I simply patched eleven 3" x 1½” strips together to give me a finished mug hug measuring 10½” by 2½” tall.  Then I appliqued the little blackbird from my Seasonal Tree mug rug pattern and hey-presto - a cosy country pen-pot.
Then, just as I was about to fill up one of these mugs with a nice cup of Italian coffee, an email popped up to tell me that Amy (of 'Amy Made That' fame) had made a lovely tree skirt from Kate Spain's 'In From the Cold' winter fabrics.  This reminded me of the left-over charm squares from my JOY banner. And before I could say, 'Yes Santa, I have been good ...... at least once this year' - I had made another slightly larger version.  This one is reserved for my Christmas cocoa.
But you don’t have to make these cute little cosies just for mugs – what about jars of preserves (jam, marmalade, pickle) - or long, long hugs for bottles of wine.  I am sure you can come up with some other ideas as well.

Oooh, that has given me an idea – how about a competition?  ‘YAY’ I hear you all screaming.  Just leave a comment telling me how you will use your mug hug.  I will pick a winner, at random, on Christmas Eve to receive a small fat quarter bundle.   (Make sure I can contact you to be in with a chance.)  And everybody who posts a photo of a mug hug onto the Across the Pond Flickr Group will get an extra chance to win.

Labels: Across the Pond Sew Along, mug rug pattern, Patchsmith, The Patchsmith 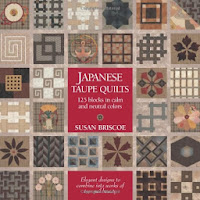 Block 8 in Japanese Taupe Quilts is called ‘Uroko’ which translates to ‘scales’ and you can see why.  It is all points and balance.
This block is rated ‘simple’ in the book and it is, just so long as you are spot on with your half-square triangle (HST) blocks.  To make sure mine were just right, I cut my initial squares to 4” and made half-square triangles which I then trimmed to 3½”.  The trimming took quite a bit of time but it saved me lots of unpicking when it came to matching up seams.  I also pressed the straight seams (not the diagonal ones) open to reduce bulk.
﻿﻿

﻿
I know there is a lot of debate about pressing seams open – I don’t normally do it, but after making the Birds-in-the-Air block recently, I have found it reduces bulk when sewing blocks together.   I am pleased with how this block turned out although it was a little boring to make.


So on to the appliqué book which was Block 73 ‘Yama fubuki’ (mountain snowstorm).
﻿

I didn't know if I would like this block as it has as many points as Block 72 (Klingon warship block).  But I was pleasantly surprised - I think the fabric I chose softens the sharpness of it.  I had two 5” charm squares that I thought would go particularly well but I wasn’t sure if I could cut all six pieces from the charm squares.  So I traced two 5” squares onto the paper side of my fusible webbing and then traced the template into the squares.  Yep, I could get three templates in each square.  This block was easy to do with Bondaweb and turned out well.  Yet again I didn’t use the protractor but ‘eyed’ it.
﻿
﻿
After all the points of the last two blocks I fancy something a little more rounded so my next appliqué block will be Block 110.  This is one of the things I like about this book – you can dip in here and there and do whatever takes your fancy.  Block 110 combines patchwork with appliqué (my speciality) whereby you patch the sections and then appliqué them on.  As for patchwork – Block 10 awaits. 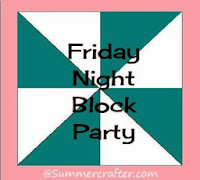 Do you remember the Shooting Star block that I made for the Friday Night Block Party?  (Just click on the picture below for the free pattern). 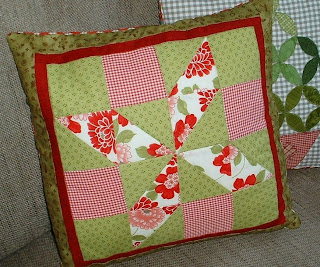 Well Elaine who hosts the Block Party over at Summer Crafter is giving away two charm packs, courtesy of the Fat Quarter shop, to one lucky person who links a block in November.   It can be any block you like.  Elaine is making the Farmer's Wife quilt blocks and  Susie and I are joining her.
I’m hooked on these little 6” blocks.  They are ideal when I only have an hour or so, after a busy day at work.
There is a book that details all the blocks and contains templates but I prefer to patch my blocks which means I get to do a little math.﻿

﻿But I love patchwork and I quite like math so it is no hardship.
This month Elaine is holding a draw at the end of November to win two charm packs – all you have to do is link up a block sometime this month – it doesn’t have to be the Farmer’s Wife – it can be any block you like.

You could even link up a Patchiqué block or a block that you have created for another project (like Quilty Fun).

Sew pop on over and check it out.

This week, on the Patchiqué journey to enlightment, I continued with simple patchwork in the form of Block 4 ‘Yotsu kumi sujikai’ (translated ‘four paired braces’).
It was so quick and easy that it went without a hitch so nothing to report here.
And likewise for applique Block 72 ‘Itsutsu matsukawabishi ' (translated as ‘five bark diamonds’).
This block is rated as 'advanced' in the book yet I found it quite simple - especially using the quick-fuse method (raw edge appliqué) - so I am not quite sure how the blocks earn their rating.   And one of the things I like about Japanese Taupe Quilts is that all templates within the book are printed at the exact size.  The instructions suggested placing each diamond at 72 degrees but I just eyed it up and it seems to have worked out fine.

However, I don’t like this block.  It isn’t that it was difficult – it wasn’t.  It isn’t the fabric – I love the fabric (though the photo was taken at night so the background doesn’t show its true cream beauty). Nope - the problem I have with this block is I don’t see bark diamonds – I see Klingon warships.  And in a quilt where the blocks are meant to “combine into works of tranquil beauty” it just doesn’t feel right to have Klingon anything let alone warships!  Is it just me or do you see it too?
Oh well, in the interests of peace within the Federation - the block stays.  But let's hope that next fortnight's blocks (patchwork block 8 and appliqué block 73) bring us back into the realm of Japanese calm.

Bobbing Apples across the Pond 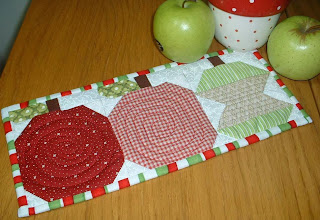 Halloween is such fun isn’t it?  We lit the pumpkins and the trick-or-treaters came knocking.  But that was yesterday and today is November!
A new month brings with it a new Across the Pond Sew Along project.  This month Amy, from Amy Made That has chosen ‘Apples’ as her theme and she is showcasing a nice selection of projects to whet your appetite.  And Susie has already made a very pretty patchwork table topper.
Apples are the perfect choice for November here in England as the 5th November is Guy Fawkes Night and apple bobbing is a traditional part of the celebrations.
﻿
One of the projects Amy mentions just so happens to be the very project that I have chosen - Lori Holt’s apple blocks. I stitched three together to create a mug rug wall hanging.   Yes, you heard right - a mug rug wall hanging.  All you need do is add quick corner triangles to the back of a mug rug and it can hang in the kitchen, ready for when you need it.
The apple block was a free project in Lori’s Sew A Row Quilt Along from 2012 and the tutorial is really easy to follow.  Unfortunately the cutting measurements are no longer included in the tutorial - I am guessing this is because Lori has recently released the Sew-A-Row quilt in her "Quilty Fun" book. I could've waited for the book to arrive but I am too impatient so I did the math.  Each block measures 4½” wide by 5½” tall (unfinished) so my mug rug wall hanging measures 12½” x 5½” finished.  Two blocks would’ve made a good desk mug rug but I wanted something longer for the pickles and sauces on the Guy Fawkes night table.


And if you decide to make a mug rug for this month’s project and you want to add quick corner triangles to the back – here is how to do it.
1.         Once you have quilted your mug rug and before you sew the binding in place, cut two 3” squares of fabric.  Fold the triangles in half, wrong sides together, on the diagonal and press.

3.         Bind the mug rug as you normally do and the corners will be stitched in place at the same time.