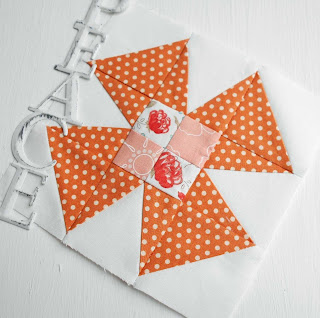 Very Kerry Berry has covered six Farmer’s Wife 1930s blocks since we last met – three of which I have blogged about previously but three of which are new.  Let’s take it in numerical order:

Block 47 – Joy.  This is a lovely block and one which I covered in January.   Notes in my book read ‘okay to paper-piece – pretty block’.

Block 48 – Judy.  This is one of the new blocks which I have only just made.  It is the same as block 29 Doris but with a different center.  I patched the center and corner squares but paper-pieced the sharp triangle patches. She reminds me of Judy Garland - it is the orange polka dot.

Block 49 – Katherine.  I patched this block way back in October 2015.  It is not one of my favourites – I guess I prefer a symmetrical approach.

Block 50 - Lady.  This is another ‘new’ block to the blog but one which I made back in November last year.  Notes read “a simple paper-pieced block with endless possibilities depending on fabric.  You could even patch the centre.”

Block 51 – Lily.  This is a block that I blogged about in January.   Notes in my book read ‘nothing with this block went together easily.  It is a very pretty block but not one I want to make again!”.

and finally ..... Block 52 – Lola.  I patched this block using the paper templates.  “Pretty in Gooseberry fabrics”.

The Gnome Angel sew-along has reduced to one block a week and this week’s block is one which was a lot of work back in October 2015 - block no. 6 April.

I'll be back shortly with an update on The Splendid Sampler blocks - they are coming along very nicely but if you can't wait you can find them all on my Splendid Sampler Pinterest board here ........
Posted by The Patchsmith at 16:24 3 comments: