I almost went right back to the beginning for the Patchiqué patchwork block this weekend – but not quite!
Block 2 - 'Shima ichimatsu' (stripe check) is created using thirty-six 2” squares – but not for me – I thought I'd take a shortcut!


I cut three strips from each fabric measuring 13” x 2” and then I stitched the six strips together, using a SCANT ¼” seam to create one piece measuring 13” x 9½”.  Next I cross-cut this piece into six 2” strips before stitching them back together as shown. 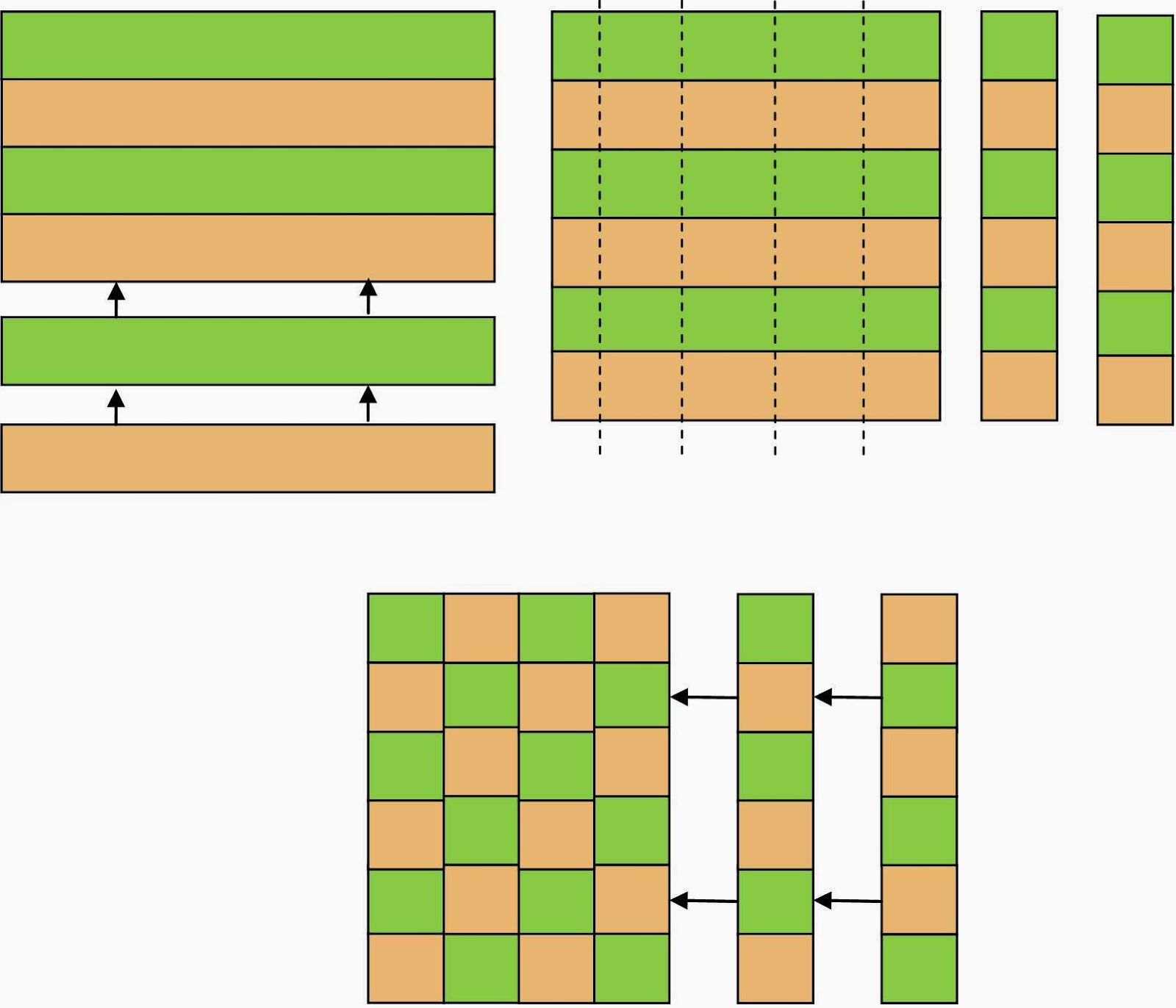 This method requires accurate cutting and stitching and I cannot stress enough to use a scant ¼” seam. (I didn’t have graduated fabric so I used two contrasting fabrics to create a checkerboard effect.)
So onto the appliqué block 106 entitled ‘Ken giku’ (sword-petaled chrysanthemum) – what I would call a Dresden Plate.
Now I have seen a lot of Dresden quilts – none nicer than this one by Amy over at Amy Made That.
But I had never made one so this was a first for me and I have to say - I didn’t like making it.  I stitched the petals together using ¼” seams but it still seemed a bit baggy in the middle so I re-stitched some of the seams.  It looks okay – but not perfect.  My points are uneven and it doesn’t lay totally flat.   But more importantly, I didn’t enjoy making it.  I cannot even put my finger on why – but I just didn’t.  So this is the first – and I suspect the last, Dresden this Patchsmith will make.
Next fortnight I will go for a simpler appliqué block – Block 70 – which is made up totally from squares to create a pretty little star.  This will be accompanied by patchwork block 45 which introduces our first inset seam.  But more about that next time ........
Posted by The Patchsmith at 13:37 3 comments:

Sewing in the July Heat

The summer is here in England and we are enjoying wall-to-wall sunshine in Hampshire.  But even in the summer heat there is still time for a little stitching.  This week I have enjoyed Camille Roskelley's teaching in her 'Playful Piecing' Craftsy class. Even after a busy day, when I was too tired to cut straight, I still managed to whip up a lovely little pin cushion from five charm squares - thanks to Camille's easy-to-follow instructions.
﻿ ﻿It is nice to watch an easy class when it is too hot to iron and too hot to patch.

And then there was July's block on the Wishes Quilt-Along.  In all honesty - not my favourite block.  I didn't enjoy making it as I am not a fan of bias cut triangles - but sometimes you just have to go with it.
﻿
And I'm glad I did.  The sewing was easy and the block turned out well.

In the excitement of designing mug rugs I forgot to show you May and June's blocks, so here they are, along with the first four month's .....
﻿

I think it will all come together well and it should be ready for quilting in the cold, wintery days of December.   Can you imagine that?  Me neither.

So what do you do when the thermometer rises and you want to spend time with your sewing machine?
Posted by The Patchsmith at 17:27 5 comments:

If you get the sense that you have seen block 18 before you would be right – it is very similar to block 17.


The only difference is the centre square ......

So it was a pleasure to make this block 'again' and, like block 17, it was an easy and relaxing make.
When I first got this book the patchwork blocks looked tricky and complicated.  But I have found them to be relatively straightforward.  In fact, I have enjoyed making the patchwork blocks more than the appliqué blocks.
Talking of which, appliqué block 109 ‘Asa no han’ (morning flower) presented a challenge for my quick-fuse appliqué method.  This block is constructed in a similar way to a Dresden circle.  Each petal is made of two fabrics.  (I cut my rectangles slightly larger than the book stated as 4” x 2”.  Once stitched together the patched block measured 4” x 3½”).  That part was easy enough.  But then came the slight adjustment.
The author, Susan Briscoe, has used needle-turn applique whereas I prefer the quick-fuse method.  So a slight adjustment was needed.
I traced the dotted line on the template onto the paper side of my fusible webbing.  I also marked the centre line and the dots on the tracing.  When I cut out the tracings, instead of leaving ¼” around the whole tracing I only left ¼” around the top of the petal (the rounded section).  I cut accurately along the traced lines on the bottom and sides, up to the marked dots (as shown below).

I fused the tracings onto the back of the patched petal blocks, matching up the line with the centre seam. 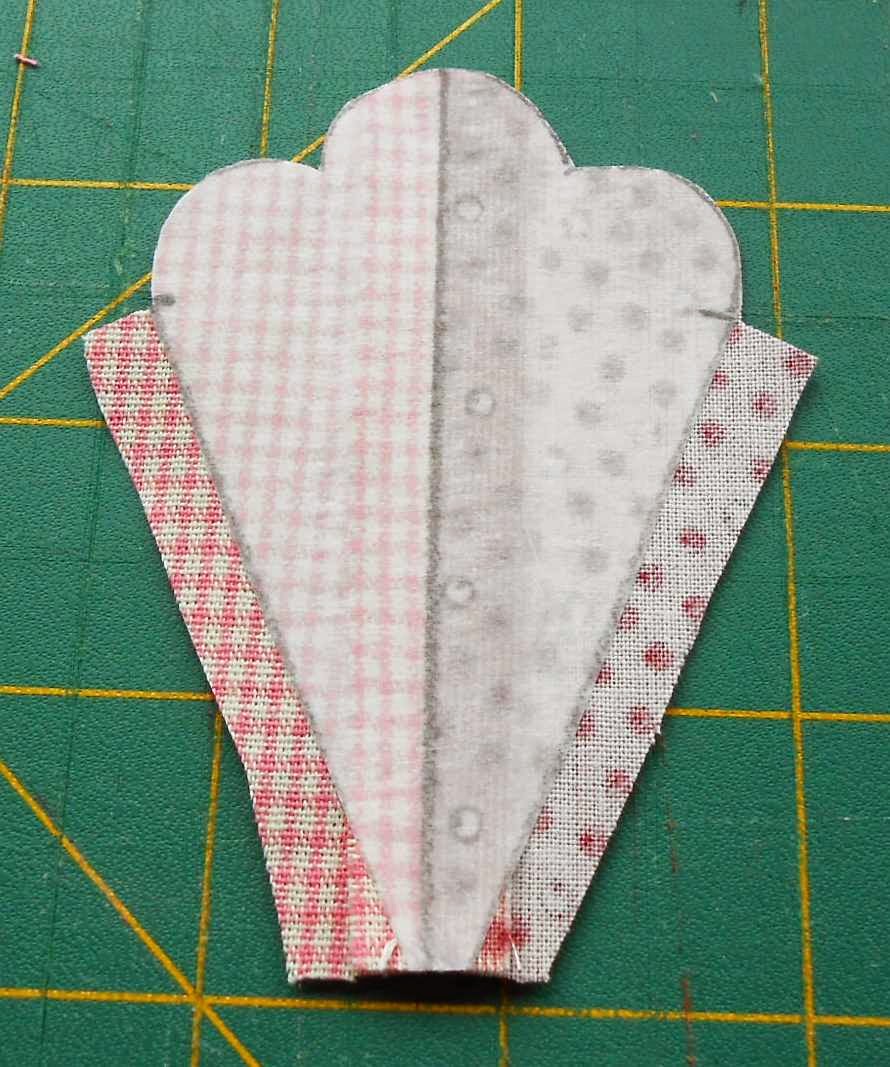 Next I cut out the petals accurately along the top curved section and the bottom but I left ¼” seam allowance on both sides of each petal.
From there is was relatively easy to construct the flower.  I stitched the sides together as instructed in the book.  Once the whole flower was stitched together I removed the fusible webbing paper from the petals (trimming the side seams as necessary) and I positioned the finished flower on the background square.  Finally I fused and stitched the flower in place before adding a fussy-cut center circle.


It sounds a lot of work but, in my opinion, it isn’t as fiddly as turning 1/8” on those curved petals.


So there you have it – another two blocks done – only twelve blocks to go.  Next fortnight it will be the turn of patchwork block 2 and appliqué block 106 (a Dresden circle).

Red, White and Blue on both sides of the Pond

Susie picked the theme for this month's Across the Pond Sew Along - RED, WHITE and BLUE.  And I love it.  Can you tell?


Red, white and blue also shouts 'sailing' and 'sea' - as shown here in Summer Crafter's new 'High Seas' pattern.
All these patterns cost pennies - not very many pennies it has to be said but pennies nonetheless.  So, if you are looking for red, white and blue FREE patterns look no further than this lovely selection (just click on the details under the photo to go through to the pattern):

And check out Susie's Sunroom for some lovely red, white and blue cushion projects. Be sure to post a picture of your finished item on the Across the Pond Flickr page.
Posted by The Patchsmith at 20:05 4 comments: